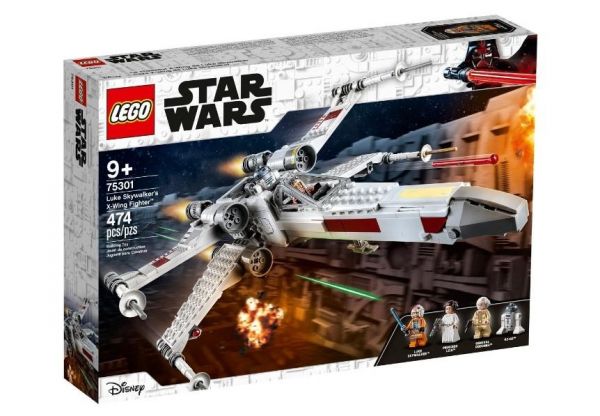 Recreate scenes from the classic Star Wars trilogy with this awesome building toy for kids, featuring a LEGO® brick-built version of Luke Skywalkers iconic X-wing Fighter (75301).
Includes Luke Skywalker, Princess Leia and General Dodonna LEGO® minifigures, each with weapons including Lukes lightsaber, plus an R2-D2 LEGO droid figure for roleplay adventures.
The X-wing features an opening LEGO® minifigure cockpit, space for R2-D2, wings that can be switched to attack position at the touch of a button, retractable landing gear and 2 spring-loaded shooters.
Fun to build and play with solo or as a group activity, this building toy makes a super birthday present, holiday gift or surprise treat for creative kids and any Star Wars fan aged 9 and up.
This starfighter construction model measures over 3 in. (8 cm) high, 12.5 in. (31 cm) long and 11 in. (28 cm) wide, and looks awesome displayed in a childs bedroom between playtime missions.
Buying for a big Star Wars fan who is a LEGO® beginner? Dont worry. This set comes with step-by-step, illustrated instructions so they can build with Jedi-like confidence.